What Are Candlestick Stock Charts?

Stock TickerPicker lets you do technical analysis on stock charts, using candlestick charts to show the price movement of stocks. It’s based on the belief that recent stock price movements give insight into the market that may help indicate what the stock will do next. What does this mean and how do candlestick charts work? This post will explain.

Candlestick charting was supposedly invented by the Japanese sometime around 1850 for trading rice. Since then, the concept has been perfected and applied to stocks. Candlesticks are so named because they refer to the visual representation of price movements by a stock, and they look sort of like candlesticks.

Candlesticks contain a variety of information about a stock’s price movement in a given time period (often 5 minute, 30 minute, or daily periods): the open, high, low, and closing price during that time period. 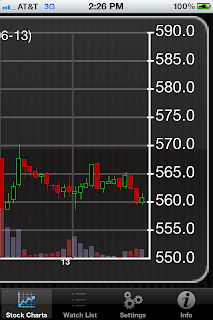